Everyone seems to hate oil companies today, which is one reason why many of them offer dividends with big, fat yields. The problem is that there are very real reasons to be worried about energy stocks, with bankruptcies picking up, particularly in the onshore U.S. oil space. But all oil companies aren’t created equal. Some are better built to weather the ups and downs in their highly cyclical industry.

Here are three high-yield oil stocks that have proven they have what it takes to survive and keep paying out generous dividends to the intrepid investors willing to buy and hold them when others grow skittish.

ExxonMobil (NYSE:XOM) is probably one of the most-hated integrated oil and natural gas giants in the world because of its massive size. Though ESG investors have pushed hard to convince the energy company’s management to change course, they have decided to double down on oil drilling. They are unapologetic about their plans to spend as much as $35 billion a year on capital projects like expanding onshore U.S. oil production and drilling in the waters around Guyana.

In fact, over the next few years, Exxon is likely to see its production head higher after a few years of contraction. Not all of that capital spending, however, is being directed toward drilling. The company is also investing in its downstream operations, boosting its refining and petrochemical manufacturing capabilities. That’s notable, because (like the next two companies to be discussed) Exxon is diversified across the energy sector. That gives its portfolio more balance, though right now, even its downstream operations are performing well in a tough environment.

The thing is, Exxon is built like a tank, so it can handle both the heavy spending and the weak business environment. For example, its debt-to-equity ratio is around 0.15, which puts it at the low end of the peer group and, frankly, in the low range for any company in any industry. Now add in a dividend that’s been increased annually for 37 consecutive years and currently yields 5.8% — toward the high end of its historical range — and you’ll see why contrarian investors should be investigating this stock today.

2. Chevron: Holding back, a little bit

Perhaps Exxon’s decision to double down on oil drilling is just a little too much for you. In that case, you might want to look at peer U.S. energy giant Chevron (NYSE:CVX). It, too, is one of the largest and most diversified energy companies on Earth. But unlike Exxon, it has decided to be more conservative with its capital spending plans, earmarking “only” $20 billion toward them. Relative to its cash flow from operations, that’s the lowest level in its peer group.

That said, Chevron is benefiting from its previous spending, so its production is still growing right now. Thus, it is hardly giving up on oil or falling behind its peers (like Exxon, it has a major effort underway in the onshore U.S. oil space). The big difference is that Chevron is a way to invest in the energy sector without accepting the risks inherent in the big investments Exxon is making.

Chevron, meanwhile, is also extremely attractive when you look at its dividend history, dividend yield, and balance sheet. The company has increased its payout annually for 32 years. The yield is currently a robust 4.7%. And, like Exxon, its debt-to-equity ratio sits near the low end of the industry at roughly 0.15. Chevron’s balance sheet is built like a rock, and the company should take the current oil downturn in stride.

France’s Total S.A. (NYSE:TOT) is a bit different from Exxon or Chevron. For starters, its debt-to-equity ratio is around 0.45 –but that’s a manageable amount of leverage for the energy giant. In fact, the company has long operated with more debt than its U.S. counterparts. Meanwhile, it hasn’t increased its dividend quite as regularly, but its payout has generally trended higher in recent years. (Note that Total is a foreign company, so the dividend that U.S. investors receive will fluctuate along with the relative valuations of the euro and the dollar.) That said, its roughly 5.9% yield is the highest of this trio. 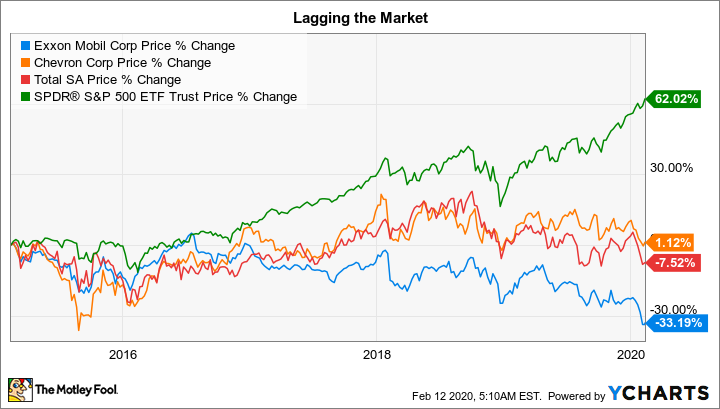 But the really big difference between them is that Total is starting to invest outside the oil and natural gas space. In fact, in 2018 it paid roughly $1.8 billion to buy a European electric utility. That’s just one of many efforts Total is making to diversify away from its carbon-based energy business. It has also been putting money to work in the renewable power generation (solar and wind) space, and investing in electric-vehicle charging operations, among other things.

To be fair, Total is still primarily an oil and gas company. It isn’t planning on drastic, overnight changes. It’s more about using its core operations as a foundation to position itself for a clean-energy future. If that sounds to you like a better path than Exxon and Chevron are taking, then you’d be well served to take a close look at Total right now.

Buying when others are selling

Oil industry executives are very clear about the future of oil — it isn’t going away as an energy source anytime soon and it’s still in high demand. Put simply, oil continues to play an integral role in the world. The current price weakness is just par for the course for a commodity known for volatility. Exxon, Chevron, and Total are all built to deal with such ups and downs while continuing to pay investors well to stick around.

Each of these global giants, however, is taking a slightly different approach. So if you like to buy when others are selling, now is a good time to look at this trio. You just need to select the one whose strategy best reflects your long-term view of the world’s energy future.

More than 64,000 infected, GDP cuts, and SARS parallels: Here's how bad the global economy could get as the coronavirus outbreak rages

3 Ways to Invest in the Space Economy | The Motley Fool

US, Russia Energy Officials Have ‘Productive Talk’ on Oil Market Plunge Amid Coronavirus

The impact of mandatory energy audits on building energy use