Donald Trump could have spent his final weeks in office boasting about his Republican administration’s achievements and trying to solidify his status as the party’s voice and likely front-runner for the next presidential nomination. He chose a different approach that yielded a much different result.

Donald Trump could have spent his final weeks in office boasting about his Republican administration’s achievements and trying to solidify his status as the most significant voice in the party and possible front-runner for the presidential nomination in four years.

Instead, the 45th president of the United States focused on fuelling conspiracy theories in a futile attempt to overturn his loss to Democrat Joe Biden in the Nov. 3 presidential election.

In doing so, he departed the White House on Wednesday still under the cloud of his supporters’ riot in the Capitol building. He returns to private life as the only president to have been impeached twice, and with some senior members of a now significantly divided Republican Party seemingly turning their backs on him.

He said Trump had an opportunity to spend these past weeks becoming the most successful lame duck president in history, by helping with coronavirus relief negotiations and supporting a defence policy that included raises for troops.

But Trump didn’t play a constructive role in either file, he said.

Trump could have also tried to help Republicans win the two Senate run-off races in Georgia earlier this month instead of sabotaging the campaigns by casting doubt on the electoral process with unfounded fraud allegations, Jennings said. The Republicans ended up losing both run-offs and control of the Senate.

“And, of course, he could have decided not to incite a violent insurrection at the U.S Capitol,” Jennings said, referring to the article of impeachment against Trump that is expected to go to the Senate for a trial. “When you consider all of the things that he could have done, it could have been a lot different for him.”

Trump’s behaviour was particularly counterproductive if you consider that he clearly wants to continue being involved in politics, Jennings said.

“Everything he did in the lame duck period drastically diminished that possibility.”

Had Trump conceded the election back in November, he may have been remembered as a disruptive but consequential president, said Matthew Connetti, a resident fellow at the American Enterprise Institute, a conservative think-tank based in Washington, D.C.

For Republicans, the Trump administration’s list of achievements would include tax cuts; deregulation; brokering diplomatic deals in the Middle East; and, perhaps most importantly, the appointment of many conservative judges, including three Supreme Court justices.

“He would have been the undisputed front-runner for the 2024 Republican nomination. But that’s not how things turned out,” Connetti said in an email to CBC News.

Although he is out of office, Trump faces the possibility of an impeachment trial and conviction in the Senate and a vote to bar him from running for office again.

“Trump’s refusal to concede, his increasingly desperate and dangerous attempts to overturn the election, his incitement of the mob that stormed the U.S. Capitol on January 6, and his decision not to welcome Joe Biden to the White House or to attend Biden’s inauguration nullified a record of policy accomplishments,” Connetti said.

Trump still has a large base of support within the Republican Party and among the conservative grassroots. Millions of his supporters agree with the baseless claims that the presidential election was rigged and stolen. Still, there are clear signs Trump’s power within the party has diminished since the riot in the Capitol.

At his departure ceremony at Joint Base Andrews in Maryland, only about 300 people were in attendance. His guests included his family, outgoing White House chief of staff Mark Meadows, senior policy adviser Stephen Miller and other current and former aides, the Washington Post reported.

But there were notable absences among top-ranking Republican officials. McConnell, who has been openly critical of Trump’s role in the U.S. Capitol riot, and House Minority Leader Kevin McCarthy were no-shows, having opted to attend church with Biden before heading over to the inauguration.

Perhaps the most significant absence was that of Trump’s vice-president, Mike Pence, who also attended Biden’s inauguration. (Pence’s spokespeople had previously said logistical issues would prevent him from attending both events.)

Trump had blamed Pence for refusing to block congressional certification of the electoral college votes on Jan. 6 — a power Pence never actually had at his disposal.

The New York Times reported that aides had tried to get more officials to come to Trump’s departure, but many were still upset over his post-election behaviour and how it overshadowed the administration’s achievements.

Some of his aides who had been with him the longest said they did not even watch the send-off on television, the paper reported. 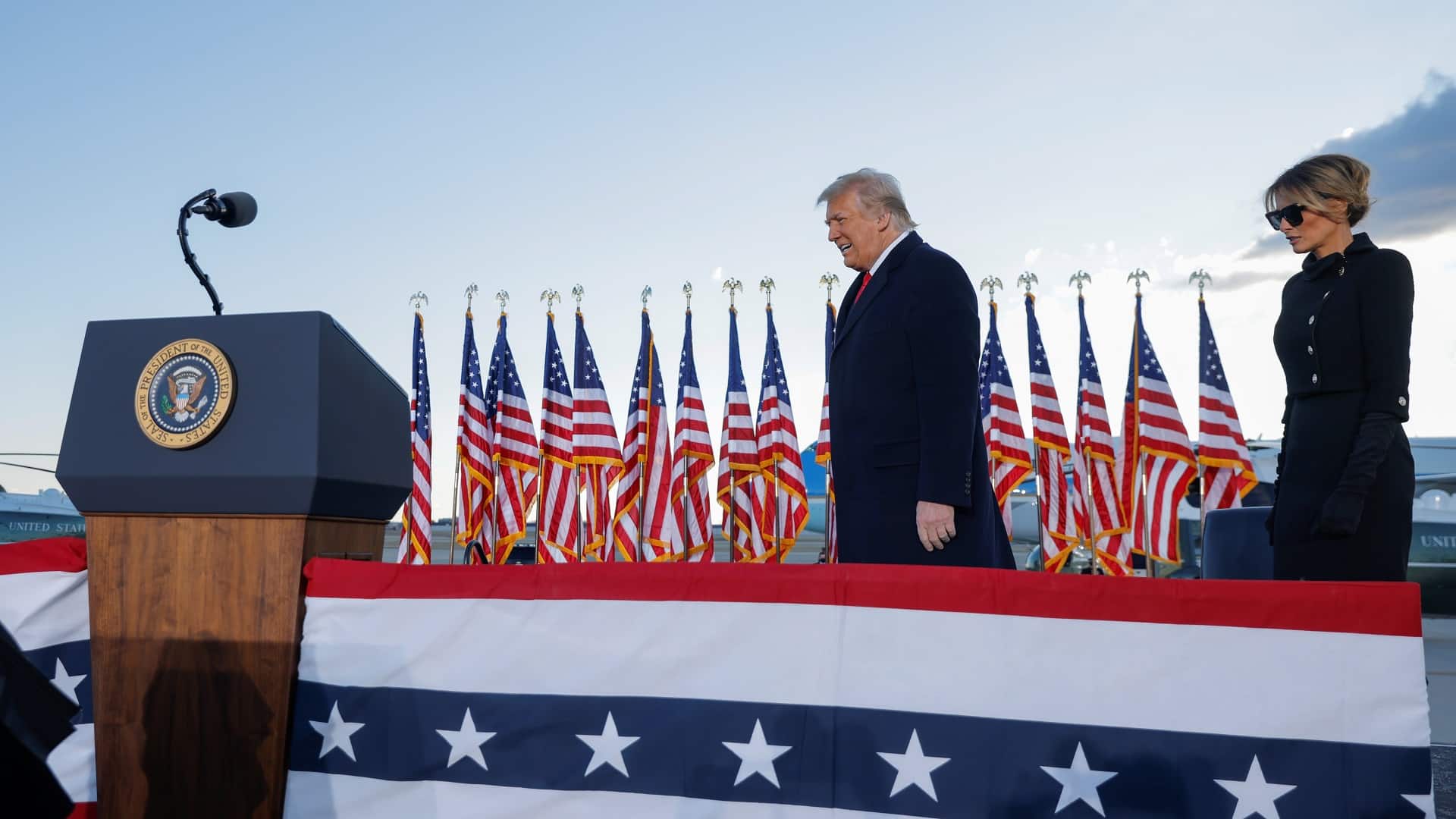 U.S. President Donald Trump formally left the White House after a struggle to hang on to office by trying to overturn the results of a democratic election. 2:13

At the national level, the Republican Party is now split in two, said Michael Cornfield, a political scientist at George Washington University’s Graduate School of Political Management in Washington, D.C.

“And the traditional Republican Party went to [the inauguration]. But the loyalists came with him to the tarmac at Andrews Air Force Base.“

Connetti said there will always be a segment of the population that continues to believe Donald Trump was a great president.

“But it is a minority,” he said, “and now the Republican Party, as a result of Trump’s actions since November, is in a state of civil war.”

Plaskett makes history for Virgin Islands after role in impeachment

Newman fundraises off of growing feud with Marjorie Taylor Greene

Plaskett makes history for Virgin Islands after role in impeachment

Newman fundraises off of growing feud with Marjorie Taylor Greene

Trump to speak at CPAC in first post-White House appearance

Trump to speak at CPAC in first post-White House appearance