Henry Lee Heinonen and his father Eric have very different perspectives on how they see the world, but over the summer, they both concluded they wanted to help people living in Toronto’s homeless encampments.

Tapestry17:18‘We all live in a city’: Father-son pair of landscapers help build shelters in Toronto encampments

It was one of Eric’s favourite routes. But on this particular drive, he looked at the multimillion dollar homes on one side of a hill — and on the other, an encampment of 15 to 20 tents covering a park.

He couldn’t understand how it was possible to have stark inequality in a city where he’d lived and worked for more than 35 years.

It was scenes like this throughout 2020 that led him to say to his son: “Hey, let’s do one good thing, at least, a week, instead of waiting till Christmas.”

Eric, 59, and Henry, 27, started volunteering together, first by delivering water — and then, as the winter approached, by building shelters.

Toronto’s homelessness crisis has become increasingly visible during the pandemic. Jeff Bierk, a volunteer with the Encampment Support Network, says the shelter system remains full despite increased capacity from shelter hotels — hotels rooms the city has rented throughout Toronto.

He added that people are worried about catching COVID-19 while staying in a shelter.

The city estimates that there are 300 to 400 people sleeping on city property. Jon Graham, a case manager at Street Health Community Nursing, estimated the overall number “is definitely double that.”

From conversation to reality

Henry has been working with his father’s landscaping business on and off since he was a teenager. He became his father’s right hand man at the start of the pandemic, as his father tried to limit the number of people he worked with.

Over the last year, the encampments had been the source of constant back-and-forth conversations in the Lees’ battered Dodge Ram.

Henry is a marxist, and when he saw the encampments, he saw decades of local housing policy and a lack of affordable housing options in the city.

“We’re in a really, really, really rich country. It’s just a fact that the resources are here to prevent something like this from happening. They’re just distributed in wildly like unequal ways,” he said.

Eric, on the other hand, is a Christian, a business owner and owns multiple homes in Toronto. These different lenses often led to disagreements between the two.

“I’m a businessman. So in certain areas, I still want to make money. Like, don’t kid ourselves,” Eric said.

“But in the same time, while I’m making the money, I give back to the society a bit more.”

In August, Eric and Henry tried to find a way to do exactly that.

Henry learned that the city hadn’t turned on the water fountains in Moss Park, a downtown park with, at the time, a dense encampment. The city said to TVO that the water fountains were turned off because it didn’t have the resources to disinfect the fountains daily to prevent the spread of COVID-19.

So they got in their truck, bought at least 30 cases of water and drove to the park. They arrived still in their soil-stained work clothes, unsure what to do next.

“The local residents were probably like, rightfully so a little bit, ‘Who the hell are these guys? What’s going on?'” Henry said.

A local leader quickly pulled them aside and directed them to people who specifically needed a drink. To avoid walking in unannounced in the future, they later partnered with the 2-Spirited People of the 1st Nations.

Over the next few months, the two pondered over other ways to help. They’d read about Khaleel Seivwright, a carpenter who had been delivering shelters that resembled garden sheds to encampment residents. While each shed only required about $1,000 of new material, they’re heavy; Seivwright needs a truck to bring in new ones.

Khaleel Seivwright says his insulated structures can keep Toronto’s homeless people warm and safe as the cold weather approaches. But the city says the shelters can pose risks. 2:07

During a visit to an Encampment Support Network event in another downtown park, Henry, his girlfriend and another close friend stayed until darkness helping build tube-like shelters made of insulation called a foam dome. Henry’s had a big M taped on the front for Monica, someone living in the park.

“I was like, holy crap. This is going to be used tonight,” said Henry, who texted his dad about it.

“This is great!” replied Eric.

The two have since been to three to four building events, with Eric often the oldest volunteer there.

One Moss Park encampment resident, who goes by AK, noted that while the foam domes aren’t as comfortable as Seivright’s tiny shelter, it’s better than just having a sheet.

“We [put] the tent on the top and you have the foam dome underneath. And then it’s nice and warm inside, you know? And you can sleep good,” he said. AK currently lives in one of the shed-like shelters, itself marked for potential removal.

The city disapproves of makeshift shelters and pods in encampments, saying they represent a significantly increased danger to those who use them.

Toronto Fire Services notes that it responded to 250 fires in encampments in 2020 — a 250-per-cent increase over the same time in 2019. The city has been removing encampment structures after a moratorium last winter. 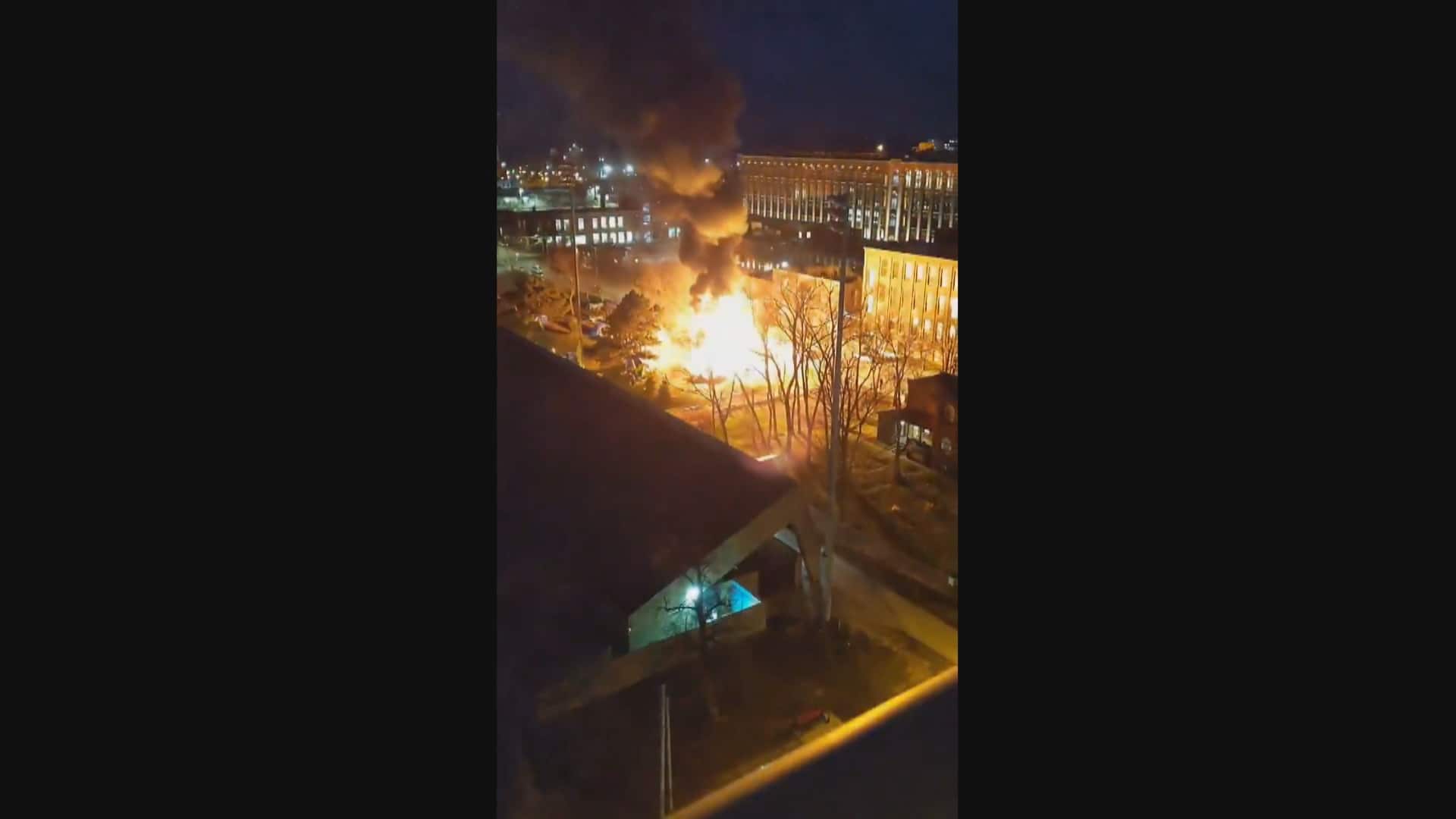 Megan Lowry, a registered nurse with Inner City Health Associates, noted that she’d encountered more people with frostbite this year than in the last four years. Usually a rare occurrence, Lowery has found at least one new case every week. Temperatures are set to drop next week, making advocates concerned.

When Henry and Eric visited Moss Park in the summer, the encampment was so packed it was hard to see over individual tents, according to AK.

Today, the encampment is sparsely filled as the city has removed tents and people have left for other parks.

The father-son duo hope to continue helping with the shelters in the new year, though Henry believes that there’s limits to what he or any volunteer can achieve working alone.

“It’s something that you can’t take on yourself as an individual like, but no social problem is. Social problems need to be dealt with on a social level,” he said.

Yet, Eric is thinking about what can be done in the meantime: “We all live in a city. So we have to help each other.”

Ultrasonic cleaning of salad could reduce instances of food poisoning

Unveiling the weaving fractal network of connecting neurons: Quest to design implants to treat macular degeneration leads research team to a discovery that connectivity is completed with a balancing act involving energy costs

Nadria Tucker On Being Fired From ‘Superman & Lois’: ‘Toxicity’ Is Pervasive

Kimmel Sums Up Trump’s CPAC Speech With A Gross Analogy

Ultrasonic cleaning of salad could reduce instances of food poisoning

Unveiling the weaving fractal network of connecting neurons: Quest to design implants to treat macular degeneration leads research team to a discovery that connectivity is completed with a balancing act involving energy costs

Nadria Tucker On Being Fired From ‘Superman & Lois’: ‘Toxicity’ Is Pervasive

Kimmel Sums Up Trump’s CPAC Speech With A Gross Analogy

HHS nominee: Country is in a COVID-19 'nosedive'

‘Sex and the City’ feud explained: Why Kim Cattrall isn’t returning for revival

In ‘City So Real,’ An Election Is Only The Beginning