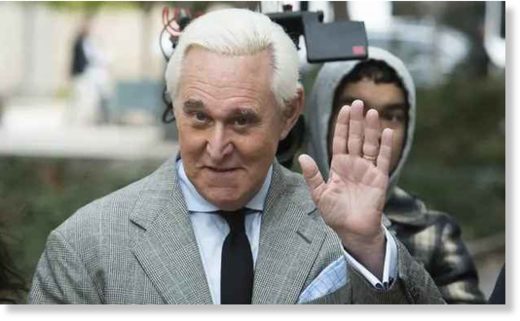 The Guardian newspaper has taken the art of obfuscation, false implication and the subtler forms of journalistic lying to new heights in its very extensive coverage of the Roger Stone sentencing saga. It has now devoted fourteen articles in the last fortnight to this rather obscure episode of American political history. Yet in not one of those articles – nor in more than a dozen articles about the Stone case that preceded it over the last few months – has the Guardian informed its readers what Stone was actually convicted of doing.

The Guardian has, in a feat of some skill, contrived to give its readers the impression that Stone has been convicted for Trump/Wikileaks links, when that is in fact the precise opposite of the truth.

Stone has been convicted for fabricating the existence of Trump/Wikileaks links, of which there were none.

The Guardian has hung its entire corporate personality on Clinton identity politics and its entire financial survival on building a new online customer base among the Clinton electorate in the USA. When even the New York Times had to admit the Mueller report utterly failed to substantiate Clinton’s inane claims that the Russians had caused Clinton’s election defeat, even when a judge dismissed the DNC’s lawsuit against said Russians as being supported by no viable evidence whatsoever, even when the entire world derided the Guardian’s massive front page lie about Paul Manafort visiting Assange in the Embassy, the Guardian has persisted in reporting as fact the preposterous conspiracy theory that its heroine was thwarted from attaining supreme power by the evil machinations of Vladimir Putin.

To maintain this stance in the face of all factual evidence requires great skill and dexterity from Guardian journalists. Fortunately for the Guardian it does not lack for fantasist Russophobe fabricators like Luke Harding or for more subtly corrupt spinners like David Smith, who last week wrote of Stone that “He was the sixth former Trump aide to be convicted in cases arising from the special counsel Robert Mueller’s investigation into Russian interference in the 2016 presidential election.”

The oleaginous David Smith omitted to note what any half honest human being would consider a very pertinent fact – that not one of those convictions had anything at all to do with Russian interference in the 2016 Presidential election, being either entirely unrelated tax and corruption matters turned up while trawling, or as with Stone being questions of process. Stone’s case is unique in that not only did his conviction not relate to any Russian interference, it was for promoting precisely the same ludicrous fantasy that the Guardian is promoting. It was illegal for Stone to persist in telling his lies on oath; there is no legal bar to the Guardian promoting the same Trump/Wikileaks/Russia fantasy ad nauseam.

Yet we have the spectacle of Julian Assange standing before a judge facing extradition to the United States and up to 175 years in jail for “espionage”, when everything Wikileaks has ever published has a 100% record for truth and accuracy.

To finish with Stone, the ludicrous vindictiveness of the prosecutors in pushing for a seven to nine year jail sentence for an offence that was really no more than wasting investigators’ time with his fantasies, was rightly called out by Donald Trump. The notion that Roger Stone threatened witnesses is problematical. Randy Credico, the only person Stone was convicted of threatening, has written to the judge asking for Stone not to be jailed and making plain he did not feel threatened. He had known Stone for years and was used to his blustering talk, which Randy never took as intended to be a serious threat.

To consider those DNC leaks published by Wikileaks in which Roger Stone claimed falsely to have a part. What the leaks did reveal was the foul play and machinations of the DNC machinery in cheating Bernie Sanders out of the nomination – including jiggling the ordering of primaries specifically to give Hillary “momentum”, and giving Hillary debate questions in advance. Nobody should be surprised to see the same tactics being deployed against Bernie Sanders – whom I should be clear I support strongly – yet again.

The “muddle” that led to CIA-linked Pete Buttigieg being able to claim victory in Iowa, for a crucial five days before the official tallies showed Bernie had in fact won was, I strongly suspect, merely a portent of what is to come. The fact the app that “misfired” was designed by four ex-Clinton staffers working for a company chaired by a Buttigieg team member is indicative of what we can expect over the next few months. The right have yet to decide on their champion to thwart Bernie. Buttigieg and Klobuchar are enjoying moments in the sun of media approval, and the DNC have now changed the rules to allow Bloomberg into future debates. That the Clintonites who have been deriding Sanders as not a Democrat, will actually switch to support Republican billionaire Bloomberg against Sanders, is something I expect to see play out over the next month as it becomes clear that neither Buttigieg nor Klobuchar can stop Bernie.

Here in the UK, I predict Bloomberg supporting Guardian editorials by April.

Still more sinister, the zionist propaganda machine has started to ramp up its attacks on Bernie. In Iowa the AIPAC linked Democrats pressure group Democratic Majority for Israel sprayed money on TV ads attacking Bernie. It is a sign of the times that Bernie Sanders, bidding to become the first Jewish President of the United States, is attacked and undermined by extreme zionists because of his entirely reasonable views on Israel/Palestine.

Despite all of which, opinion polls show Bernie with a clear lead heading towards the Nevada primary. I remain cautiously hopeful that the degree of cheating required to stop Bernie gaining the nomination would simply be too much to hide, and that the Wikileaks DNC revelations may ultimately, by showing up the dirty tricks last time, help Bernie to power this time. We should, however, never underestimate the resources of the financiers and the security state which will be deployed against Bernie in the next few months. It is going to be a fascinating year in US politics. Either the Democrats will pick a right wing standard bearer and lose to Trump, or Bernie will become President. I do not share the general fatalism on the left which deems the latter impossible.

Stone Age hunter-gatherers' diet may have been full of heavy-metals, and during a time of sea level rise

‘Not necessary’: Trump says he will not impose quarantine on New York, New Jersey & Connecticut